I was out today with my co-conspirator Kitty!! We decided to revisit some of the hideous DNF’s we had had on Run Around’s Takely Trail a few weeks ago. Thankfully, we managed to turn all but one into a nice smiley – phew!

Satisfied with that achievement (for the moment), we headed towards Braintree to look for Up The Wood – a cache up a tree. Neither of us are keen climbers, so we had come prepared – a stepladder and Larry The Litterpicker solved the problem quickly!

Those were all really just hors d’oeuvres to the main event – Brain Tunnel by flossregularly. This had been on Kitty’s wishlist for ages, but it hadn’t really registered on mine for some reason. But I was very keen when she suggested an expedition in our waders!

We had seen how easily it was to fall flat on your face from previous finders’ photos (Infinson, I mean you!) so we found ourselves two big sticks to steady our progress. The bottom of the river Brain was very silty and we made slow progress along the spidery tunnel. I was just concentrating on keeping upright, but Kitty was imagining all sorts of horror below the water as we slowly picked our way along!

Eventually we spotted the telltale glint in our head torches, and found the cache. Huge care was taken not to drop anything in the water! I looked quite frightening but was glad I could get a photo to prove I went down there.

It was with much relief that we emerged, blinking, into the daylight once more, euphoric that we had survived in the silt and stayed upright. It was still quite a job to pull ourselves up the slippery bank, I nearly fell back in but just about retained my dignity!

It was great fun, and all the better to be living on the “edge” of our comfort zones again! This one didn’t fill in a new DT square for me, but it was still a hoot.

I was out with Kitty!! and Mr Crow again today. Our first target for the day was the D1/T5 hide, the Cottage Pie Bonus cache near Ongar. A tree over water, Kitty volunteered to scale the obstacle, and the cache was quickly spotted.

This nicely fills another DT square fore (and us all). My grid now looks like this, 10 left! 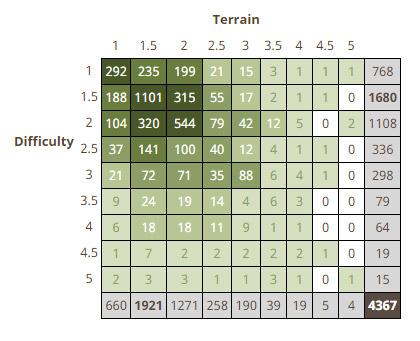 After that success, we relocated to Takeley to attempt Run Around’s Takeley Trail.  But first there was time to find the Church Micro to pick up. There were lovely patches of snowdrops in the churchyard.

We had mixed success with the trail, there were lots of great hides but we also failed to find 6 of the 17 on the loop! And we had to take quite a diversion on the walk to avoid this collapsed bridge:

This one was an easy find but more tricky to open! It took at least 4 hands, glad I wasn’t trying to do this one on my own.

Kitty!! and Crow (meanies) handed me this one to open. They both have similar puzzle boxes and knew its secret. I got there eventually.

So, a good day out, but it’s a shame we were so rubbish at finding so many. We’ll be back to try again another time.

During Mega Week, I had heard great things about the caches in Hatfield Forest by Run Around, but sadly hadn’t had the time to look for them then. So I decided this would be a good place to go with Alistair for today’s caching expedition.

We weren’t disappointed! As well as the usual hides in trees by other cachers, Run Around’s series was inventive and very well put together. We had to work hard to extract the logs at each cache and the feeling of satisfaction when we succeeded was great! Each one was a little different and thankfully we managed to crack them all.

We also found a few caches along the Flitch Way nearby, including Start Hill Sums which I had solved over breakfast this morning.

The planes coming in to land at Stansted flew right over us as we searched for the cache – we got a bit distracted watching them but found it in the end!